May 5th cont.
The sunrise that morning was obviously a huge deal. For twenty days the skies had been a seething mass of dark gray, lightening only slightly during the daytime hours and becoming pitch black at night. Yet there it was; a fiery ball, clearly seen in all its circular glory through dense clouds the color of blood.

I woke Molly and together we stepped outside, gazing skywards, squinting at the hellish glow surrounding the sun. Each moment spent there, holding hands and shivering in the chilly morning air, saw the sun slowly inch higher above dying trees and ash-covered hills. It was awe inspiring. Breathtakingly beautiful. But wrong. 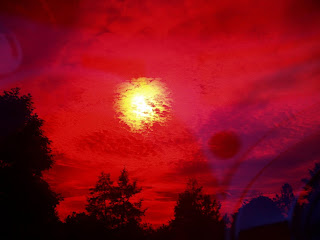 In many ways we were seeing the same sort of sunrise that folks living in places full of smog had witnessed for years. Yes, the colors were amazing; oranges, reds, maroons and streaks of yellow amid black streaks like veins on a zombie’s flesh. But it was wrong. Unnatural.

Once that fact sank in, the beauty became more akin to a shark moving gracefully through thick clouds of blood in water. I imagined nothing would grow beneath that red sky. I doubted solar panels would soak up enough light for even a trickle charge. And psychologically speaking, a blood-red world was seriously gonna fuck with people’s minds.

“Jaeger? You up?” Came Hope’s voice over my little walkie-talky, static crackling as the signal struggled to cross the distance.

“Mornin Hope. What’s up?” I replied, pulling my gaze away from the sky to sweep our surroundings. The previous night’s raid still had me furious and wary.

“Silas is having a meeting for everyone in the area tonight at six. There’s going to be food served. He wants to talk about the sky.”

I nodded, then realized she couldn’t see me and pushed the talk button, “Ok. We’ll be there. He’s pulling in everyone from nearby or just us?’

“Speaking of food,” Molly grumbled bitterly, “we need to get some. All that’s left is a half empty jar of peanut butter.”

“Yeah. I know. Got that covered though.” I offered with a grin, squeezing her hand. “You can drive, right?”

It took no small about of effort to get Frank to stay. I watched as Molly repeatedly pointed to a chair in the workshop, trying to make her father understand that we wanted him to remain behind. In a rare moment of intelligence, he shuffled over and laid one hand on my shoulder. The stare his white eyes laid on me was intense.

I nodded, understanding and returning the gesture. “I'll protect her. She’ll be safe.”

The same blank look returned after I’d spoken but he turned slowly and took a seat, staring straight ahead at the door before him.

Molly and I were in the van twenty minutes later armed for war. The timing would be tight if we were going to make it back in time to catch Silas’s meeting and the van suffered from my haste.

I floored the petal during open stretches of roadway heading southeast, ramming through undead and vehicles at a higher clip than normal. There was no stopping for lunch. No breaks to get out and stretch our legs. Just white-knuckled driving that saw us arrive in Noank just after noon.

I’d told Molly about my encounter at Green Acres and the end result. It wasn’t a surprise that the building was dark and deserted as I pulled the van through its gates. Bodies still lay scattered about. The garbage truck hadn’t been moved from its parking spot halfway inside the retirement home’s entryway. Everything was just as Mary and I had left it. Except for the bloodred sky.

Molly waited just outside while I did a very quick sweep of the first floor. Time was of the essence and I was built of sturdier stuff than her so caution wasn’t a priority as I kicked in doors and trotted down the halls yelling. Nothing came to see what all the fuss was about.

We looted all the food, ammunition and rifles Mary and I had left behind for the elderly survivors I’d booted during my assault. Apparently they never came back. I worked for half an hour to get the damaged 50 cal machine gun off its mount on the ruined Humvee while Molly filled empty gas cans with diesel fuel from the generator. Together we gathered the big gun’s ammunition before heading back out through Green Acre’s open gate.

Our next stop was the old barn where I’d stashed the other Humvee and remaining food. Blood from the two National Guardsmen I’d killed still coated the interior, congealed into thick black fluid that stuck like tar to our hands. The shots I’d fired in haste had wrecked much of the dashboard but the thing was still drivable. No heat or radio though. Luxurious it was not.

It was pushing two in the afternoon by the time we got everything loaded and the Humvee’s dead battery jumped. I let Molly take the van and led the way with our new ride, driving even more recklessly with what I considered a mostly junk vehicle, heedless of whatever beating its armored body suffered from ramming undead. At least the way back was more passable thanks to our earlier trip. Dead cars don’t move on their own. Only dead zombies.

It was five thirty by the time we got back to Hunter’s Home. Frank shuffled out and silently stood beside his daughter, body language somehow relaying relief that she was safely home. His awkward steps seemed more lively as he climbed into the van with Molly. Our two vehicle caravan pulled out of the Woods soon thereafter and reached the Fort twenty minutes later.

Got a question? Wanna make a comment? Chris Philbrook over at Adrian's Undead Diary has graciously given us some webspace in his forums to talk about Dead Too, Rights. Drop by, share your thoughts and be sure to check out his excellent zombie story!