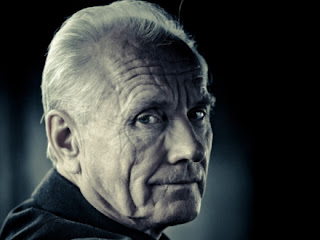 Most people aren’t in the least bit threatened by a frail, old man. That’s probably why no one bothered me until I made it to the drug rehab complex where I’d heard a big group had set up shop. A pair of young men wearing mismatched fatigues stood watch at a gate set into the perimeter chain-link fence that surrounded the place. I held up my hands and offered a smile.

“Hello the gate!” I called from forty feet away.

“Put your guns on the ground!” One of them called out, pointing the barrel of his weapon at my chest.

“Will do. Gonna move nice and slow. Don’t get carried away young fella.” The rifle was mine from Vietnam. The handgun an old revolver inherited from my father’s father. Both sat down before my feet a few moments later.

Hands went back into the air after I’d finished the task. “All set. I’d like to come in and stay awhile, iffn you’ll let me.”

We waited like that for a few minutes before a truck pulled up and more men with more guns climbed out. Cautious bunch to be sure. One opened up the gate. Rifles covered me before hands patted me down and picked my weapons up off the ground. Damn if my arms and shoulders weren’t burning by then.

“Who are you and what do you want?” A man in black asked. He was older than the others. Late thirties. Early forties. Had the look of a hardcase about him. Head shaved. Goatee. Muscles. Wearin sunglasses even though the sun hadn’t shined right in a month.

“Name’s Glen Donahue. I live right down the road there a bit. Food ran out yesterday so I figured I’d see if you had room for another.”

The man in black nodded and inspected my weapons before handing them back to me. “You know how to use these things Glen?” He asked.

“Come on in. I’m George.” The hand he offered had a lot of calluses, a lot of strength and a lot of confidence.

“You this King George I’ve heard tale about?”

“One and the same,” He answered with a laugh. The other men laughed too while they followed us to the truck. One opened the door for me with a sarcastic bow.

I’d never been to the Cross Rehab Clinic before but knew the basic layout from driving by it for years. Big place surrounded by woods that sat off the road a bit. Chain link fence on all sides. Little pond in the middle of a big open yard.

A big brick, three story building rose up on the far side of that yard. Lots of smaller buildings, most of em cottages like the kind at cheap motels, were scattered around the central yard on either side.

They pulled the truck around back to a big parking lot behind the main hospital building and killed the engine. Another line of chain link fencing surrounded the asphalt where several Army rigs were parked.

And God bless my soul if they didn’t have an Armored Personnel Carrier. I whistled softly and patted George on the back. “Well I’ll be. Good work young fella. How many folks you got?”

“We’re up to sixty-two now. Just had to hit that old mill they converted to condos. You know the one I’m talking about?”

I nodded and stiffly climbed out of the truck, knees poppin loud in protest. “Sure do. The one down by the lake with that fancy hydro-electric dam. They get uppity with you lot?”

“I had someone on the inside that said they were thinking about launching an attack against us.” He shrugged and patted my back. “Nothing to worry about now. They’ve been handled and most of the survivors are with us now.”

An Asian woman stepped out of a covered doorway set into the building’s center. She smiled and met George with a kiss that made me blush and look away.

“This is Olora. She’s my second in command here.” George said to me before turning back to the pretty gal at his side. “Olora, this is Glen. He’s got the look of an old Army man about him so let’s set him up nice. Have someone give him a tour and show him where he’ll be staying.”

“Pleasure’s all mine, young lady.”

“I’m sure.” She turned back to George and placed a hand on his chest, makin me feel all dismissed and such. “Will you be sending out the assault team tonight?”

The woman had a strange way of speakin, to be sure. Her voice was kinda flat. Emotionless. It made the hairs on the back of my neck stand up.

“Team’s already there scouting things out. They’ll hit the forest just after sunset.” He shrugged and kissed the top of Olora’s head with a grin. “Just one chick. I don’t care how badass everyone thinks she is.”

“Don’t underestimate her, my love. Jaeger is not an easy woman to kill.” With that, it was George’s turn to be dismissed and I felt her dark eyes crawling over my skin. “Now Glen, if you’ll be so kind as to follow me, I’ll lead you to someone who will be happy to help you get settled.”

“Yes ma’am.” I offered after falling into step behind her. At least she had a pretty little backside to watch as I damn near had a heart attack trying to keep up with her pace. People got out of her way when we went inside the hospital building and I knew right then and there that George might’ve been the King around here but everyone really served the Queen.

Got a question? Wanna make a comment? Chris Philbrook over at Adrian's Undead Diary has graciously given us some webspace in his forums to talk about Dead Too, Rights. Drop by, share your thoughts and be sure to check out his excellent zombie story!